This week I have given three presentation about the basics of money and different monetary systems. Herewith the slides that I used at Bitcoin Wednesday at Pakhuis De Zwijger. More and more I think that we need a debate and a democratic decision about what kind of money or moneys, and what kind of monetary system we want to have. Fortunately the scope and scale of the debate is changing slowly; more fundamental questions are asked and more people get involved. If you want to participate in this debate, on September 2oth there is a large conference Geld voor de Toekomst at the Erasmus University (Rotterdam). I think it will be an interesting day.

Yesterday I gave a talk and participated in a debate about Sustainable Banking at the University of Wageningen, organised by Green Office Wageningen. We had some good discussions about the relation between our money system and sustainable development. Herewith my sheets. I would like to thank the New Economic Foundation for their input and great work, in particular Josh Ryan-Collins and Tony Greenham. 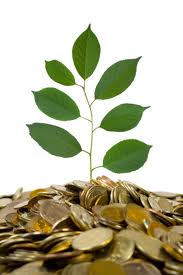 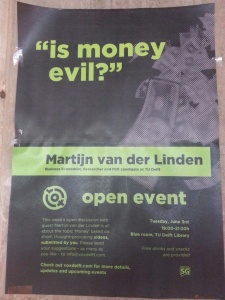 Last Tuesday I was invited by VOX Delft, a student run organization that stimulates critical and creative thinking, to comment on five video’s about money and to discuss with the audience. The title of the evening was Is money evil? This refers to a passage form Ayn Rand’s book Atlas Shrugged:

“So you think that money is the root of all evil? […] Have you ever asked what is the root of money? Money is a tool of exchange, which can’t exist unless there are goods produced and men able to produce them. Money is the material shape of the principle that men who wish to deal with one another must deal by trade and give value for value. Money is not the tool of the moochers, who claim your product by tears, or of the looters, who take it from you by force. Money is made possible only by the men who produce. Is this what you consider evil?”

The funniest video was about a new crypto currency, Titcoins, the world’s most beloved and safest currency.

Free Banking:  a system where banks are free to issue their own currency
Video What is free banking, and why should I care? (2013)
Book Denationalization of Money, Hayek (1976) (advanced)

Also NEF’s article What’s wrong with our financial system? is interesting to read. It offers 5 alternatives for the current monetary system and monetary institutions:

It is important to keep in mind that the emergence of our monetary system has very little to do with conscious design in terms of improving social, ecological and economic sustainability. It was the outcome of historical accidents and power relations, particularly those between banks and politicians. Nowadays we have the unique opportunity to develop and to implement better money systems. I think more and more discussion and experiments will come.